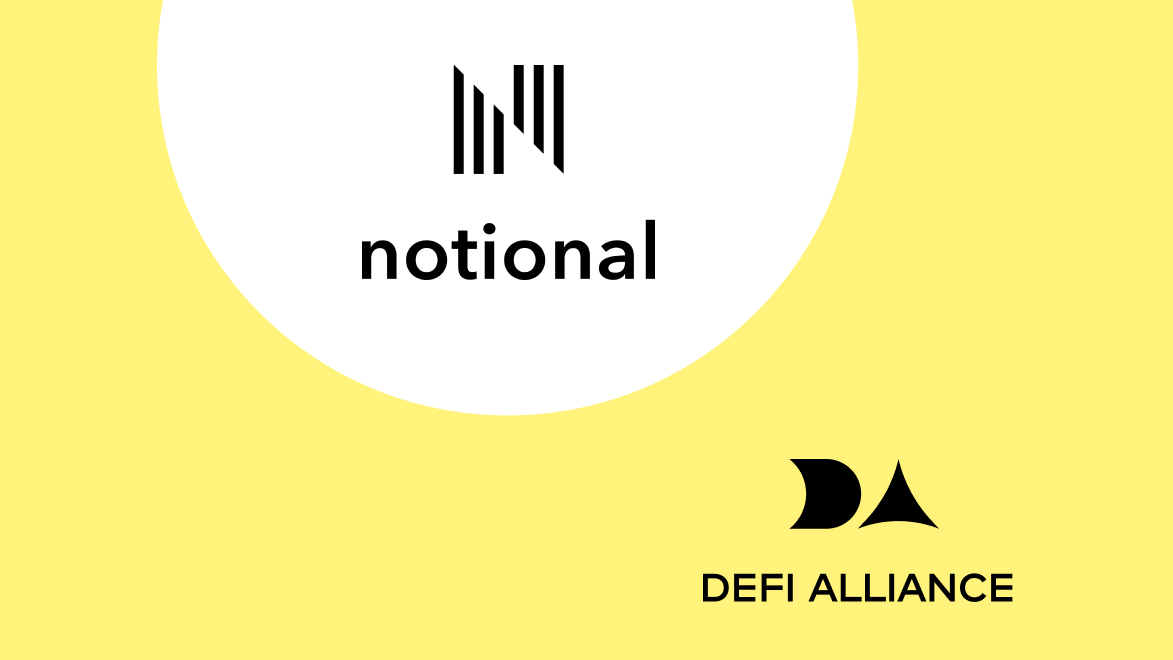 On Thursday, August 19, 2021 Adam Patel from DeFi Alliance hosted an AMA with Notional.

Notional is a decentralized protocol that enables fixed rate lending and borrowing on Ethereum.

The Notional team is preparing for the upcoming launch of Notional V2 on October 4th which will include their native governance token the NOTE, as well as a public liquidity mining program.

Read the full transcript below to learn more about the differences between V1 and V2, details about the liquidity mining program, and how Notional provides LPs with attractive yields.

Adam: What's up @Teddy Woodward | Notional! Super excited to have you here today. If you can do a quick intro on yourself as well as Notional that'd be great!

Teddy: Thanks @Adam Patel | DeFi Alliance and all - very excited to be here and answer your questions.

A bit about myself, I'm the Co-Founder and CEO of Notional. I started Notional with my partner Jeff Wu in January 2020. Jeff is the tech guy and writes all the code - he spent a decade as an engineer and engineering manager prior to starting Notional. I'm the finance guy, I was previously an interest rate swap trader at Barclays for about 4 years

Now a bit about Notional: Notional Finance is a decentralized protocol that enables fixed rate lending and borrowing on Ethereum.

The Notional team is preparing for the upcoming launch of Notional V2 on October 4th which will include their native governance token the NOTE as well as a public liquidity mining program.

You can learn more about what’s new in Notional V2 here:

Adam: Awesome backgrounds! So with V2 around the corner (congrats on that btw), can you touch on the difference between Notional V1 and Notional V2?

Teddy: Yeah, from a business standpoint there are two main differences between V1 and V2:

As a third point also, we are introducing out native governance token the NOTE and a public liquidity mining program - so LPs on Notional V2 will earn NOTE incentives as well!

You mentioned the launch of NOTE (gov token) and a public liquidity mining program. When does liquidity mining start? Is there any other information people need to know about the LM program?

Teddy: Yup, the liquidity mining program starts with the launch of our V2 on October 4th. We've put a ton of work into making sure that it provides a great opportunity for LPs and I think we've done that. The way the liquidity mining program works is that NOTE incentives accrue directly to nToken holders. nTokens are already very good because they provide good returns, they're easy and ERC20, they're freely-redeemable to the underlying, and they're eligible collateral on Notional. The NOTE incentives are the cherry on top to make sure that LPs are properly compensated and get people over the hurdle of putting their money into a new system

Teddy: We'll launch with USDC, DAI, ETH, and wBTC. These four currencies will be eligible for NOTE incentives, with the majority earmarked for USDC and DAI.

But Notional V2 has a flexible collateral so we intend to onboard more collateral types soon after launch - although not necessarily for lending and borrowing.

Imran: Could you touch on the flexible collateral framework?

Teddy: We prioritize capital efficiency, and that shows up in our collateral framework. On Notional you can borrow against both fCash (our zero-coupon bonds) in any currency, as well as nTokens in any currency. This means that you can earn yield on your collateral while borrowing against it! For example, you could earn interest + liquidity mining incentives on your nETH or nDAI, and then borrow USDC against it!

Adam: Might also help to detail what nTokens are.

Teddy: Sure - nTokens are what you get when you provide liquidity to Notional. They earn the Compound lending rate + Notional liquidity fees + NOTE incentives

Imran: Nice! Is there governance around adding new collateral types or is that primarily conducted by the team early on?

Teddy: Yup, we won't have admin keys, so this will all happen on chain

Adam: people love yields on their stables hah thats great. Can you touch on the supply distribution of NOTE?

Teddy: Sure. There's 100M total NOTE. Of that, ~43.3M will go to the team and early investors. 750k is going to an airdrop, ~6M is going to a community/economic development fund, and the other 50M NOTE will sit in the on-chain treasury. The plan is to distribute those 50M NOTE as liquidity incentives over the next 4 years

Adam: What does the lockup look like for team and early investors? And to add: is there any lockup on NOTE liquidity incentives?

Teddy: The lockup for the team and early investors is a three year total term with quarterly unlocks. The first unlock will be 15 months after the issuance date of the NOTE. There is no lockup on NOTE liquidity incentives.

Adam: got it got it thats helpful. So has V2 been audited?

Adam: Yep that's great to hear. Security's certainly top priority. In case any exploit does manage to happen, is there smart-contract insurance available on Notional V2?

Teddy: Yes! We will have insurance available from both Nexus Mutual and Sherlock Finance at launch

Audience question: Teddy, I remember you had a mobile strategy back in the days. Is that still the case? When do you think mobile interfaces will take off in DeFi?

Teddy: Yes, Notional is available on mobile. We haven't prioritized it a ton yet, but we will make it a bigger priority after we get V2 off the ground with a successful launch

Adam: The fixed-rate protocol space in DeFi is beginning to heat up. What is the difference between Notional and the other ones out there?

Teddy: Yes that's true. In recent months we've seen lots of new entrants into this fixed rate space. A key difference between us and these newcomers is that we allow both fixed rate lending and borrowing. Almost all of the other fixed rate protocols only work for lenders, and that significantly restricts their utility. The fact that we can cater to both sides of the market allows us to address a larger user base and it has benefits for lenders as well.

The other fixed rate protocol I'd touch on here is Yield, who is the most similar in construction to Notional. I think a big difference between us and them is the work we've done ensuring that LPs get a really attractive opportunity on Notional with our Compound integration, and with nTokens.

I think we can offer a superior experience for liquidity providers with more capital-efficiency and that's a big advantage there.

Adam: yeah i like the focus on LPs and providing them the attractive yields to stay. I guess I wanna ask why would someone use Notional instead of a centralized lending desk?

Teddy: Notional is open, transparent, and efficient. It might seem new and risky now, but I think that ultimately it will be safer to use Notional than to use a centralized lending desk because you don't know what they're doing with your money so you're exposed to a lot of counter party risk. So that's the first point.

The second point is that it's more efficient. For example, if you mint nETH on Notional and borrow USDC against it, you are getting all of the value out of your collateral. Notional the platform is taking almost nothing. If you were to use a centralized lender, they would take your collateral and they would earn any value from it, not you.

Over time, Notional is going to be a cheaper, safer, and easier service to use than a centralized lending desk

Adam: Yeah i think that point about counterparty risk is huge and then obviously the composability of DeFi is just super attractive.

Adam: Does Notional operate on other chains besides Ethereum? And how about L2s? What's the plan there?

Teddy: For now, Notional is only on Ethereum. But after we launch V2 we are going to turn our attention to L2s so we can cater to a broader user base - we're at the very early stages of that implementation but we've got some good ideas of how we're going to deploy on other L2s in a way that strengthens the liquidity on Ethereum mainnet as opposed to fracturing it.

So stay tuned there! I would expect us to come out with something Q1 or Q2 next year.

Adam: ooo looking forward to that for sure. I guess to wrap things up, would love for you to share where people can learn more about Notional, find you online, etc.

Teddy: If you want to learn more about Notional you can check out our website, follow us on twitter, or just send me an email. Here are links for you:

Thanks so much for having me!

Adam: Teddy, it was a blast. Thanks for teaching us about Notional and looking forward to following along the journey!